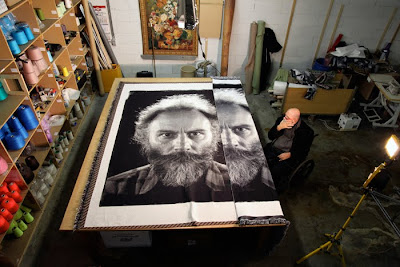 Chuck Close inspects experimental proofs of a new tapestry portrait at the mill in Belgium, December, 2010. Close's tapestries are woven on a computerised Jacquard loom using techniques developed at Magnolia Editions. Photo by Donald Farnsworth.
This online review of James Essinger's book Jacquard's Web, which considers the descent of modern computing from the punchcard-driven Jacquard loom, offers several interesting points about the connection between clothing/textiles and technological advancement.

The reviewer also suggests a link between bobbin-lace and the development of Jacquard's punchcards:

I also wonder where Jacquard got the idea for punched cards. [...] I have a theory, actually; bobbin-lace patterns. Bobbin-lace was as expensive and slow to make as brocade, and the patterns changed with fashion much faster than one person could make up a suit of lace. Complicated patterns require pinholes punched into stiff card, which give a skilled lacemaker enough direction to make up the pattern. Middlemen made up many many cards corresponding to small pieces of a fashionable pattern and handed them out to lacemakers as they picked up the finished pieces from the last pattern. It would have been important that the patterns lined up well to be invisibly sewn together, although the threads did not weave from one piece into the next.

I think there must have been a lot of these cards around, especially in a town as devoted to luxury clothing as Lyons was. It's still a big intellectual jump to switch from a human feeling with a pin to know where thread-crossing should go, to a machine that always crosses in the same places feeling a card to decide whether a crossing should happen; but it would explain why sheaves of punched cards 'looked like' information storage.

Read the whole review here; for more on Essinger's book, check out his website.

UPDATE: Donald Farnsworth points out that Jacquard's punchcard inspirations are actually well documented, as in this video from the "Connections" series by James Burke (begins at the 6:00 mark in the first video):

Posted by Magnolia Editions at 12:41 PM