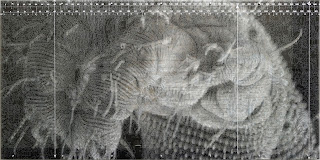 Artist and experimental composer Guillermo Galindo recently created several innovative works at Magnolia Editions for Pacific Standard Time: LA/LA, this year’s Getty-funded exhibition series devoted to Latino and Latin American art. Galindo’s new works were commissioned by curator Josh Kun (as part of his multi-venue series "Musical Interventions") and will debut as part of an exhibition at the Huntington Library, Art Collections and Botanical Gardens, exploring “how the depiction of Latin American nature contributed to art and science from the late 1400s to the mid-1800s” and opening on Sept. 16, 2017. Galindo explains that these works will serve as a commentary and counterpart to the Huntington’s concurrent “Visual Voyages: Images of Latin American Nature from Columbus to Darwin” exhibit.

Each work in Galindo’s Human Nature: Sonic Botany series consists of a combination of printed aluminum and plexiglas panels, materials chosen for their austere, laboratory-like properties: Galindo notes that the plexiglas suggests the clear plastic slides used to view samples under a microscope. In the two largest works, a layer of translucent plexiglas is printed with manipulated images of microscopic insects or bacteria (and in one case, a secret message in Braille); beneath this layer, a sheet of aluminum is printed with patterns derived from cactus plants. The artist likens this visual strategy to the troubling tendency of corporations to combine plant, insect, and bacterial genomes, creating new species resistant to weather or disease. The paired layers of these works create a shifting, kaleidoscopic sense of movement and visual complexity; each piece appears to change, as if metamorphosing, as the viewer passes by. 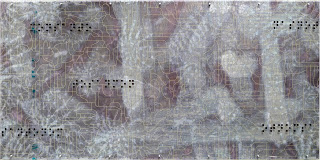 The smaller works in the series employ Galindo’s signature graphic ‘scores,’ building on a tradition established by composers such as Sylvano Bussotti, Earl Brown, Cornelius Cardew and John Cage, all of whom blurred the lines between music and visual art. For Galindo, a musical score can be defined as “a set of symbols written on a piece of paper or any other readable surface, to be translated into sound events to be reproduced in real time.” The horizontal landscape format of these works also suggests pre-Columbian codices. One panel features a Braille tribute to environmentalist Ignacio Chapela, who discovered genetic pollution and corporate interference in species of Mexican maize.

Galindo says that these works evoke “mutant jungles,” a comment on the colonization of the microscopic world by corporations. Just as the Spanish colonized the New World, he explains, assigning names to the “new” species they encountered, so do today’s corporate powers use patents to assert their dominance over a world of flora and fauna that is hidden from the naked eye. As the invisible becomes the domain of science – a turn Galindo links to the Greek concepts of mythos and logos, or the overtaking of religious or mythic concepts by reason and science – these works ask us to consider the ways in which contemporary corporations have taken advantage of this shift to manipulate and colonize the territory of the unseen.

Guillermo Galindo - HPP5 (hormigopsycoticus poisonosa), 2017
acrylic ink on acrylic and aluminum, 9.5 x 48 in.
Posted by Magnolia Editions at 11:07 AM No comments: