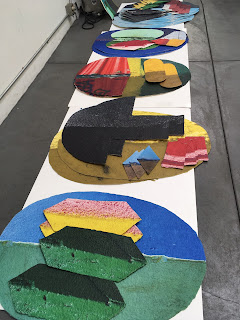 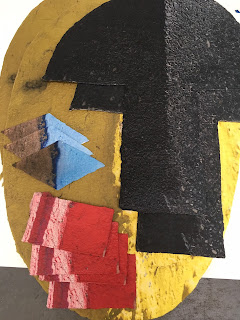 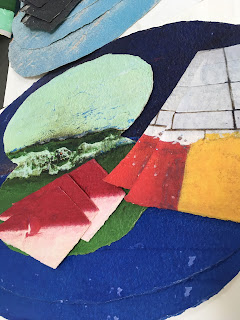 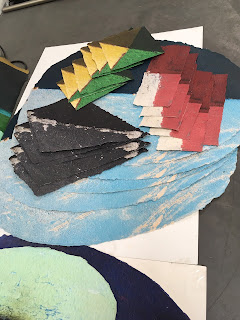 Handmade paper components for forthcoming work by Alex Arrechea
Handmade paper is formed in large custom shapes which are printed using UV acrylic ink and then 'floated' together within a frame to create a composite, collaged image with an unusual degree of dimensionality. 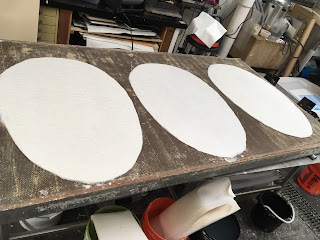 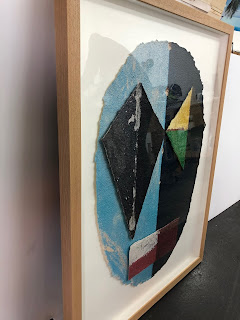 Snapshot of a completed Arrechea work, showing the layered "floating" collage approach
The results of Arrechea's experiments with Magnolia, as well as a survey of the artist's mask works, will be exhibited at Galeria Nara Roesler in New York City (opening February 20, 2019) and at New York City's Armory Show at Piers 92 & 94 in March. 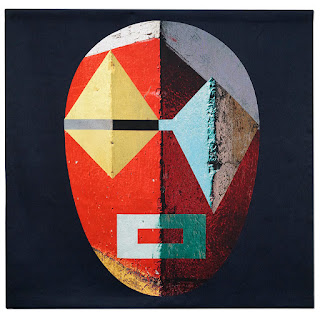 Trinidad-born, New York-based artist Alexandre Arrechea’s work explores the intersection of art and society, taking particular delight in confounding the questions of form and function posed by architecture. He was a founding member of the storied Cuban artist’s collective Los Carpinteros, responsible for some of the most important drawings and installations to emerge from Latin America in the last twenty years. Arrechea's work in media including sculpture, video, and installation continues to deconstruct and re-envision the visual syntax of architecture and the environment with humor and élan. 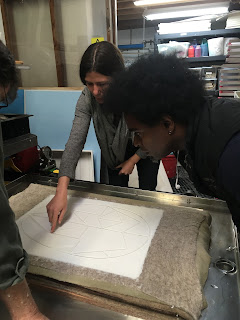 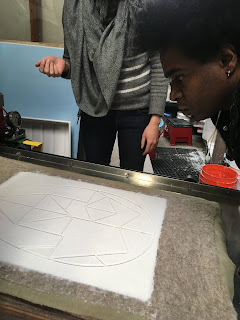 Arrechea has worked closely with Magnolia Editions since 2015. His first tapestry edition Mask Series: Havana (2016) weaves together a vibrant photomontage, one of a series of masks whose constituent elements are drawn from photographs of buildings in the Cuban capital. Specifically, Arrechea strategically photographs the corners of these buildings such that the light (sunny) and dark (shadow) sides are both visible, yielding two distinct tonalities. The resulting imagery possesses a curious and provocative mixture of flatness and depth, familiarity and exoticism, abstraction and mimesis. 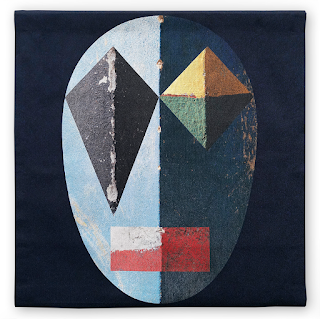 In addition to his ongoing series of tapestries, Arrechea has been working with Donald Farnsworth and Tallulah Terryll in Magnolia's handmade paper studio, exploring the possibilities of translating his mask compositions by deploying handmade paper in a variety of novel ways – e.g., printing, embossing, or composing an image via sections comprised of pulps of various tonalities.

The results of Arrechea's experiments with Magnolia, as well as a survey of the artist's mask works, will be exhibited at Galeria Nara Roesler in New York City (opening February 20, 2019) and at New York City's Armory Show at Piers 92 & 94 in March. (Check out the artist's colorful Instagram account for previews!) 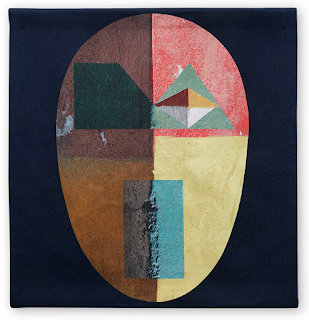 Writer Nick Stone caught up with Arrechea at Magnolia Editions recently for a brief chat about his ongoing collaboration with the studio:

NS: How did you first get involved with Magnolia Editions?

AA: I remember being in New York in 2014. At the time I was already working on the idea of the masks; I had printed them on regular photo paper and framed them conventionally. I exhibited them at my studio in Havana. I was happy with the results, but I felt something was missing, something was lacking there. I still needed to find the right medium for those particular pieces.

In New York I’m walking in Chelsea and I enter Pace Gallery and see Chuck Close’s show of tapestries at Pace. I’m looking at them and thinking, wow, this is all I need! This is the medium I need in particular for developing these ideas. So I spoke a friend to see if he knew who did the fabrication for Chuck and he said, yes, I know someone who can introduce you to them.

In 2015 that friend of mine and I decided to come to the west coast because we wanted to plan a visit to Napa Valley. Because Magnolia is here in Oakland I said, this is perfect, we can visit them. So that’s the moment when we came to Magnolia and had a really nice chat about the possibility of working together. 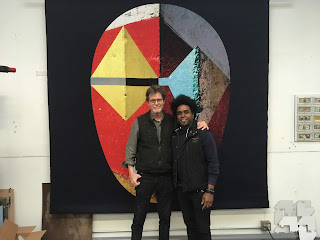 Departing from there, I did exhibit my first tapestry in the Havana Biennale in 2015. It was interesting because at the time I exhibited that particular piece alongside other installations I did in the national museum in Cuba and people didn’t connect immediately with the work; they didn’t know exactly what it was. Especially because of the nature of the work itself. When you have to explain that those [constituent elements] are corners, that it’s a tapestry... nobody was familiar with that language in Cuba at the time. I remember there was this collector from London, he came to the exhibition, saw the piece and fell in love with the piece immediately.

I continued my exchange with Don and Era about the possibilities of this collaboration and there was a moment where Don told me: “Alex, you don’t have to worry about producing [fabricating] this; we can help you to organize all that so you can focus on creating the ideas.” So that definitely put the work on a different level. 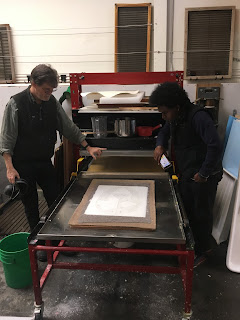 I had been absent from the workshop for a period, because we had done this first project in 2015 and I haven’t visited Magnolia again until now. But we have been collaborating from afar. It became so natural for me to discuss ideas with Don and Era and Nicholas [Price] that right now it feels like this collaboration is growing and growing. And I’ve been feeding my gallery with information about what we’re doing now and everyone is so excited.

So now we are doing for the first time the first show dedicated to the masks, in February, so this is very exciting. And we are planning another show in June in Brazil, in Rio de Janeiro, to which I’m also going to bring all of the ideas we have been ruminating about during my time here. 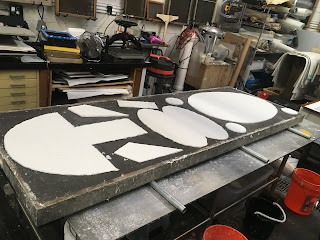 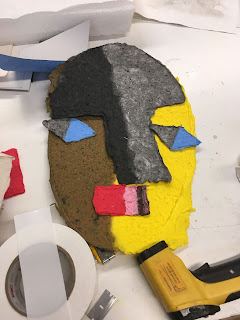 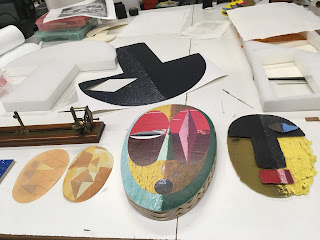 NS: You’ve worked with various collaborators and fabricators over the years. What stands out to you as being unique about working with Magnolia? How would you describe it to another artist?

AA: One of the things that I fell in love with about this place since the first visit is the curiosity that Don showed me about investigating materials, process, and recognizing history as part of the ground that makes this place possible. In that sense I think we have a familiarity; for me that was a perfect approach. Then on top of that you have this moment in which you are discussing an idea and then Don brings you something that he was thinking about the ideas that you’d brought that takes your ideas to a different level.

So this discussion has become so rich and so perfect to me that at this moment I consider this place, Magnolia Editions, one of my main places to bring experiments – future experiments that you still don’t know [how it will turn out]. For instance, when I arrived here this week, Don showed me some tests he had done using paper, and I said to Don: “Were you visiting my head the week before, or what?” Because I had been thinking precisely of that. It’s funny, this idea of creating the paper by pouring different colors of pulp in certain areas and creating one sheet of paper formed with different tonalities – that is something that I was trying to build up but I didn’t know how. And then arriving here, Don had that ready for me and it’s like: come on, you’ve got to be kidding me. 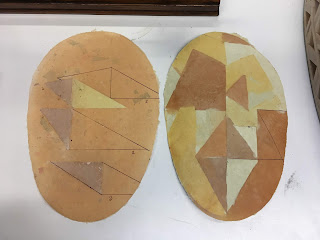 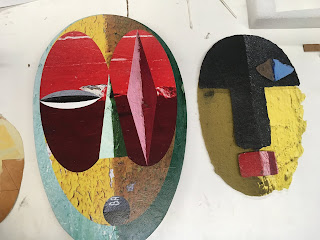 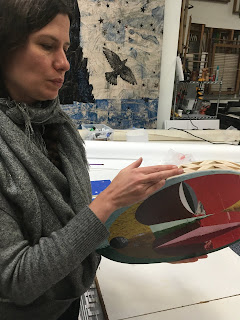 NS: So it looks like you and Don are working on masks at various different scales and in a few different media?

AA: Yes, we started with the tapestries — first eight feet tall, then six feet tall. Then we started with handmade paper, first printing just on the surface so that the texture of the paper blends with the texture of the image. Then came this new opportunity, which I realized was interesting, to separate the layers. Now we are in this third or fourth part of the process which is mixing those two ideas: using paper that is already multiple tonalities, and then placing the layers on top of it. So it’s getting richer and richer. 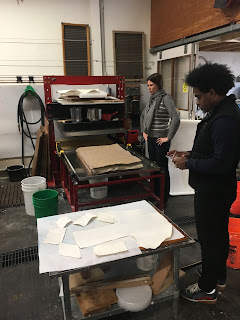 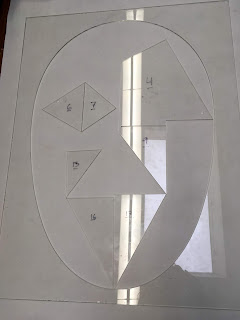 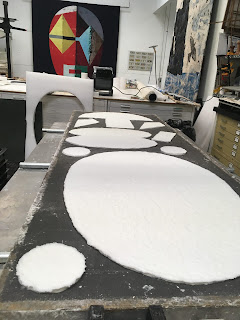