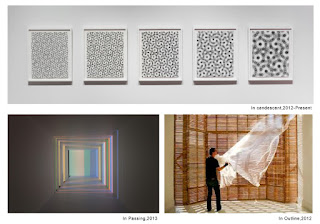 Artist Chris Fraser with recent work; photos courtesy Fraser and Gallery Wendi Norris.
Congratulations to our friend and Magnolia Street neighbor Chris Fraser, who is currently in Tokushima, Japan for the 2016 Artist in Residency program at Awagami Paper Factory.

Fraser is represented by Gallery Wendi Norris. You may recall Awagami as the family-run handmade paper mill responsible for the giant (55.5 x 44 in!) sheets of handmade paper used in Chuck Close's 2014 watercolor edition Phil. Magnolia is pleased to continue its relationship with this historic yet innovative company, and to see them partner with the talented Fraser to create exciting new works involving handmade paper.

Posted by Magnolia Editions at 4:48 PM No comments:


In Enrique Chagoya’s Untitled (After Edward Curtis) (2016), the artist inserts a billboard featuring an Apple iPad Mini and the all-seeing eye of the American dollar in the expansive and unspoiled Western landscape of Edward Curtis’s An Oasis in the Badlands (1905). The West and the American West, specifically the Bay Area, are places where money and corporate interests saturate the visual and physical landscape. Famously, Curtis attempted to capture an “authentic” picture of the “vanishing” Native American Indians, which was a somewhat problematically conceived and executed enterprise. Chagoya also includes a small, shadowy figure leaping across a small pool of water, a reference to Henri Cartier-Bresson’s Behind the Gare St. Lazare (1932). Cartier-Bresson’s image embodies what the photographer termed the “decisive moment,” the creative point when a photographer acts upon the world to frieze a moment, rendering it magical. In juxtaposing Curtis and Cartier-Bresson, Chagoya presents two photographic paradigms: one where the photographer is in search of a specific picture and the other that waits for the world to unfold and operates on the serendipity of life. Chagoya almost poses the question about how we intervene on a world where corporate interests threaten the stability of place for those less powerful, when is the “decisive moment”?

Read the whole review here, and check out Incline Gallery's website for visiting information: the gallery is open 1-6 pm this weekend.