Enrique Chagoya - Caníbales Daguerrotípicos, 2015.
Inkjet on RC photo paper, 6.5 x 95 in. Edition of 12
In his 2015 print edition Caníbales Daguerrotípicos, Enrique Chagoya’s “reverse Modernism” gives birth to a series of scenes halfway between dream and art historical legend. The print is structured like a pre-Columbian codex, reading right to left with each section paginated by traditional Mayan numbers; but instead of printing on the Amate bark paper often used for his codices, here Chagoya’s imagery is filtered through the reflective, grisaille, silver-grained look of a 19th-century daguerreotype and printed on heavyweight, glossy RC photo paper. 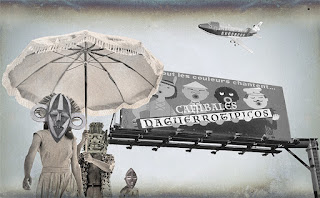 Detail from Enrique Chagoya - Caníbales Daguerrotípicos, 2015. Chagoya's "reverse Modernism" dresses a photograph of Pablo Picasso and his wife in African masks; behind them stands a vintage Hervé advertisement with text detourned by the artist; above their umbrella soars a plane-shaped coffin from West Ghana.
Caníbales Daguerrotípicos hinges on a dreamlike collage technique pioneered by the Surrealists, but can ultimately be read as an inversion of 20th-century Modernism, a strategy for which the artist has coined the term “reverse Modernism.” Artists identified with both Surrealist and Modernist movements were enthusiastic in their affection for art from Africa and indigeneous American cultures, extending their appreciation for the “noble savage” to bold, even shameless appropriation – what Chagoya deftly terms “cannibalization” — of formal aspects of these civilization’s artworks. Picasso’s paintings mimicking African masks are the most well-known example, which Chagoya links here to a broader Modernist tendency spanning various creative disciplines: from Henry Moore’s imitation of Aztec sculptures of the god Chac-Mool in his sculptures of seated figures to Frank Lloyd Wright’s use of Mayan architectural motifs in his designs for well-known Los Angeles landmarks. Caníbales Daguerrotípicos reverses the flow of these influences, channeling an alternate history wherein culture is produced by “primitive” civilizations’ domination and appropriation of Western techniques and imagery.

Detail from Enrique Chagoya - Caníbales Daguerrotípicos, 2015. At left, a famed Eduard S. Curtis photograph is interrupted by an Apple iPad billboard and a small running figure from Cartier-Bresson; at right, a Piet Mondrian-inspired dress by Yves St Laurent adorns a sculpture of Coatlique, the Aztec goddess of life and death, topped with an Aztec skull of the dead.
Caníbales Daguerrotípicos also cannibalizes the work of various photographers who made a career of depicting indigeneous peoples, such as Eduard S. Curtis’s images of Native Americans and Irving Penn’s pictures of Aborigines in Papua New Guinea. With a sense of humor and a keen understanding of the often one-sided historical exchange between Western art traditions and the “noble savage,” Caníbales Daguerrotípicos’ dreamscape turns the feeding frenzy of Modernism on its head as photographs by Curtis, Penn, Cartier-Bresson and Agustin Casasola are all subject to Chagoya’s playful yet deliberate appropriation. Chagoya says he identifies with a definition of surrealist humor once given by Andre Breton in a radio interview – “Humor is the triumph of pleasure over pain under the worst conditions for pleasure” – noting its parallels with the gallows humor common in Mexico, and paraphrases a quote from Breton identifying surrealism not as a category of art but instead as a fundamental aspect of existence. 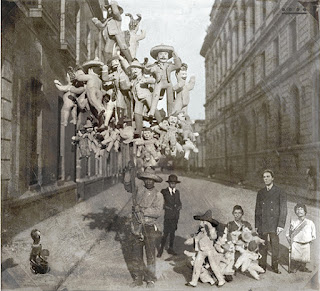 Detail from Enrique Chagoya - Caníbales Daguerrotípicos, 2015. Thanks to "reverse Modernism," a Mexican street scene by Agustin Casasola is newly populated by Surrealist leader Andre Breton and filmmaker Jean Cocteau.
Given that the cast of Caníbales Daguerrotípicos features several pre-eminent Surrealist artists and writers, it is fitting that the print should take the form of a dreamscape. Patricia Hickson has written of the artist’s codices that “these nuanced, imaginary adventures with a social conscience could only exist in the space of a dream,” recalling Chagoya’s paraphrasing of a pre-Columbian religious precept: “life is a dream,” he says; “when you die, you wake up.” The temperature of information is cooler in this work than in Chagoya’s previous codices, making it even more dreamlike; its muted palette gives the impression of a black-and-white vision unearthed from the depths of the subconscious, or a hand-tinted antique photograph from a mysterious bygone era. 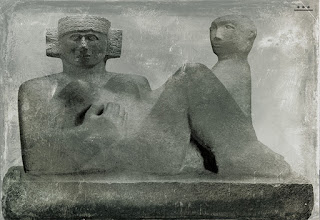 Detail from Enrique Chagoya - Caníbales Daguerrotípicos, 2015; a Henry Moore sculpture wears the head of Aztec god Chac-Mool.
In Andre Breton’s first Manifesto of Surrealism, the foundation of the movement is identified as “the omnipotence of dreams” and its fundamental goal as “the resolution of those two seemingly contradictory states, dream and reality,” in a perpetual coexistence. Breton’s own history combines elements of dream and reality, especially after having been retold and embellished over the years. Intrigued by Mexico and its rich vein of mythopoetic tradition, Surrealism’s founder famously visited the country in 1938 as an ambassador of the burgeoning art movement. The story goes that Breton, having arrived in Mexico but lacking the ability to explain himself in Castillian, provided a local carpenter with a drawing in linear perspective of a table he wished to commission. The carpenter dutifully returned two weeks later with a table built exactly to the literal specifications of the drawing – that is, ignoring the perspective completely, with one side dramatically shorter and more narrow than the other. According to legend, Breton threw up his hands, sighed “I have nothing to teach these people,” and promptly packed his bags to return to Paris.

Yet in Breton’s Perspective cavalière, a more plausible story comes to light. Breton writes: “Benjamin Péret told me that, in Mexico, a carpenter —surely improvised—received the charge of making a bedroom like one in a photograph included in a catalogue. The man managed to create the bed, the table and the chairs exactly as they looked in perspective. Why not pause placidly in the elusive mirrored wardrobe?” In the end, no one can say with certainty that this encounter with the carpenter ever really happened; it might be nothing more than a parable drawn from Breton’s imagination. 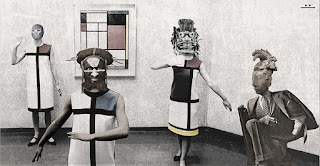 Detail from Enrique Chagoya - Caníbales Daguerrotípicos, 2015; models in YSL Piet Mondrian Pop Art dresses also sport heads from Mexican wrestler Blue Demon and Irving Penn photos of Papua New Guinea, and a Mayan head meets the dandified body of Jean Cocteau.
In Caníbales Daguerrotípicos, Chagoya pauses time itself in that “elusive mirrored wardrobe” of Surrealist dream logic; the impossible or anachronistic situations depicted in his imagery call into question the supposed infallibility of a linear historical narrative, revealing instead the kaleidoscopic, contradictory nature of our understanding of reality. Whether by inviting Aboriginal masks to disrupt and subvert a 1960s advertisement for Piet Mondrian-themed Pop Art dresses by Yves Saint Laurent; dressing performance artist Joseph Beuys in Native American warrior garb; or returning Breton (with contemporaries Marcel Duchamp, Luis Bunuel, and Jean Cocteau) to the streets of Mexico City for another chance to unlock the mysteries of Mexican surrealism, Caníbales Daguerrotípicos reminds us that history’s heroes and their exploits are merely characters in an ongoing fantasy – one that is ours to dream, and ours to decipher.

Detail from Enrique Chagoya - Caníbales Daguerrotípicos, 2015; at left, Frank Lloyd Wright considers a contemporary monument to native peoples in Mexico City; at right, Joseph Beuys tries on the Native American headdress and breastplate of an Eduard S. Curtis portrait subject.
More art by Enrique Chagoya from Magnolia Editions
Posted by Magnolia Editions at 11:41 AM No comments: