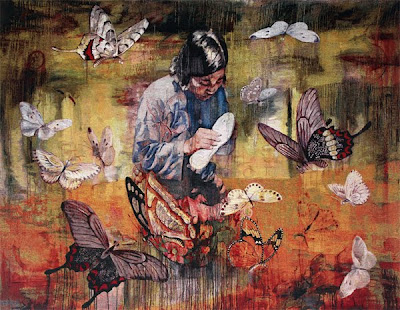 Hung Liu - Madame Shoemaker, 2012. Jacquard tapestry, 56 x 72 in. Edition of 12.
Chinese history has always been the essence of Hung Liu’s work: raised in Beijing during Mao’s Great Leap Forward and trained in the Social Realist tradition, Liu now uses painting as a means to reanimate historical photographs. “I hope to wash the subject of its exotic ‘otherness,’” she writes, “and reveal it as a dignified, even mythic figure.” Liu’s tapestry Madame Shoemaker finds the exalted and the serene in a forgotten moment from the first half of the 20th century, revealing the beauty and heroism in the labors of an anonymous woman from China’s past.

Like many of Liu’s works, this tapestry edition is based on a painting which was in turn based on a historical photograph: in this case, a scene of women from a village in the Chinese countryside, who made shoes, clothing, and other supplies for anti-Japanese fighters during the second World War. For Madame Shoemaker, Liu singled out one of the women, finding a personal connection: “Making shoes for your family is a Chinese tradition,” explains Liu, “my grandmother made shoes for me when I was young: I remember watching her slowly make each part by hand from a tough, strong hemp and sewing them together, little by little.” The artist likens this activity both to a meditative state and to the practice of making art in general: putting time in day by day, slowly accumulating work to see a project through to completion. The woman depicted thus becomes an avatar both for Liu herself and for the universal power of feminine creativity and strength.

The tapestry’s title, explains Liu, was inspired by the butterflies surrounding the figure; these colorful creatures are based on traditional Chinese paintings of butterflies on silk from the 10th and 12th centuries, and reminded the artist of the opera “Madame Butterfly.” However, Liu is quick to point out that her Madame is “more blue collar, stronger and happier” than that opera’s helpless, tragic heroine. She is demure, but no less strong and significant than the soldiers who will receive the shoes she makes: “It’s important to remember when looking back at the war,” says Liu, “that there was not just a ‘band of brothers’ but also a whole band of sisters standing behind them.” 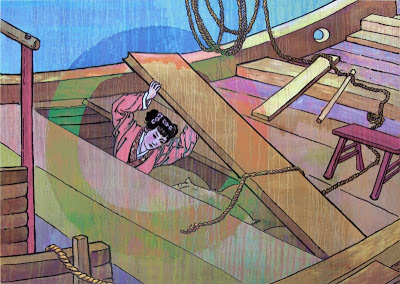 Hung Liu - The Lifter, 2012. Woodcut with acrylic, 23.25 x 34.75 in. Edition of 25.
Magnolia also recently published two editions of woodcut prints with acrylic, The Lifter and The Reader, which may initially surprise Liu enthusiasts with their unusual line quality and pictorial simplicity but which deserve a closer look: there is more going on than first meets the eye. Liu based these innovative works on imagery from illustrated patriotic stories in the xiaorenshu, or Chinese picture books, that she read as a child and which she likens to the Dick and Jane primers supplied to American children in the 1950s. 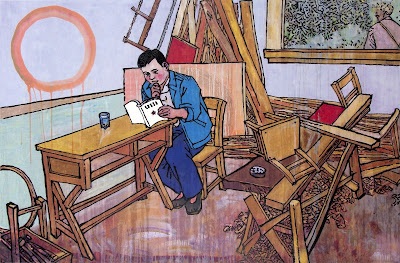 Hung Liu - The Reader, 2012. Woodcut with acrylic, 23.25 x 34.75 in. Edition of 25.
Exhibited as part of Liu's "Happy and Gay" show at Rena Bransten Gallery in San Francisco, the imagery in these prints is "at once charming and eerie," says the exhibition's press release: "Seen from an historical perspective, the propaganda angle strongly supplants the fable or entertainment factor." Incorporating her extraordinary sense of color and signature brushwork via layers of printed acrylic, Liu adds a dimension of historical inquiry and bittersweet, even ironic reflection to the crisp woodcut lines and straightforward, storybook imagery of the xiaorenshu: these works "can be understood, in part, as homage to all the artists who lost their art to propaganda during China's revolutionary epoch."

Liu's exhibition "Happy and Gay" is on view at Rena Bransten Gallery through January 12, 2013.