In memory of Mark Stock

Mark honed his mastery of printmaking at Gemini G.E.L. in the late 1970s, working as a printer for artists such as Robert Rauschenberg and Jasper Johns. Later, his paintings, etchings, and monoprints of pensive lovers displayed a unique talent for summoning an entire world out of color and costume.

Mark’s all-time hero was Charlie Chaplin; as he revealed in a 1988 article in California magazine, the cartoony gloves and floppy folds of fabric worn by the characters in his paintings were an homage to Chaplin’s oversized style on screen.

Like his hero, Mark himself was larger than life — an effortless magician, a talented jazz drummer, a championship title-holding golfer, and of course a phenomenal painter. With his dark suits and wry charm, he seemed to inhabit the romantic, old Hollywood atmosphere of his paintings, even going so far as to bring his visions to life by first casting and staging each painting as a photograph. “It’s the most fun I have,” he once told an interviewer; “then I have to paint it.”

He was also quite generous when it came to sharing the magic of his world. When Donald Farnsworth taught a graduate class on large-scale art projects at Magnolia a few years ago, Mark invited students on a field trip to his Oakland home. He naturally provided great entertainment with a few magic tricks, but also took the time to patiently and thoughtfully answer questions about the life of a working artist; it was a display of benevolence and hospitality that spoke volumes about the painter’s character.

Mark Stock - Self-Portrait, 1994
drypoint etching, 13.75 x 11.25 in. Edition of 20
Mark was preparing for a major show to open May 1st at Modernism, in celebration of the silver anniversary of his most famous painting, The Butler's In Love - Absinthe. The painting has hung over the piano at Bix Restaurant in San Francisco since 1989; it has been seen in movies and even inspired its own short film by the actor David Arquette.

The strength of his technique and storytelling provides pleasures that are age-old, operatic, Shakespearean. Given a few minutes alone with those bald, lovesick butlers, […] the heart’s about to burst but the soul is smiling. 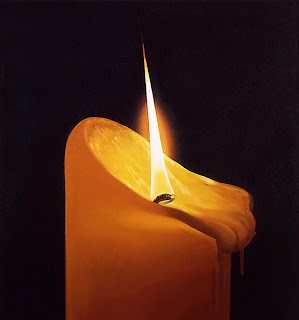