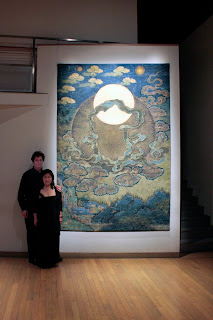 Donald and Era Farnsworth with their collaborative 2004 tapestry Dharmakaya in Tokyo in 2008.
Dharmakaya is included in the Awards Exhibition at Worth Ryder Gallery, opening this Wednesday, March 19th.
The Southern Graphics Council International conference is right around the corner! The SCGI is hosting its 42nd annual conference, Bridges: Spanning Tradition, Innovation, and Activism, in the San Francisco Bay Area this year; it will be the first West Coast conference in the organization’s history.

The SGCI will present a variety of awards to distinguished print artists and UC Berkeley Continuing Lecturer Randy Hussong has organized an exhibition at the university's Worth Ryder Art Gallery for the recipients of these awards, including the Innovation award winner, Magnolia director Donald Farnsworth.

The Grand Opening Reception for this exhibition is this Wednesday, March 19th from 4 to 7 pm.

Rather than exhibiting only his own work, Farnsworth has chosen to highlight a variety of projects published by Magnolia Editions in the last thirty years. The show will include works representing a host of proprietary and unorthodox processes by a veritable who's-who of Bay Area artists including Joan Brown, Enrique Chagoya, Hung Liu, Ray Saunders, Squeak Carnwath, Bruce Conner, and Rupert Garcia, plus a collaborative print by William Wiley, Robert Hudson, and Richard Shaw; recent tapestries by Chuck Close and Kiki Smith round out the exhibition. 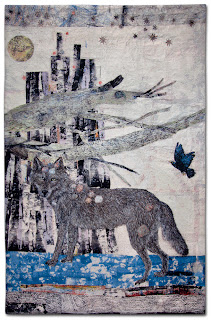 Additionally, work will be exhibited by award winners Juan Fuentes and Sylvia Solochek Walters, and by Professor Emeritus Richard Shaw, whose award is in the appropriately titled Breaking The Mold category. There will also be installations by Ehren Tool -- a ceramicist who Magnolia blog readers may recall from the Combat Paper Project -- as well as the UC Berkeley Advanced Printmaking Class.

If you can't make the Grand Opening Reception on Wednesday, March 19th, there will be a special Conference Tour event on Friday, March 28th from 10 to 5 pm.

For more information on the show and associated events, please visit the Exhibition's home page.
Posted by Magnolia Editions at 2:45 PM