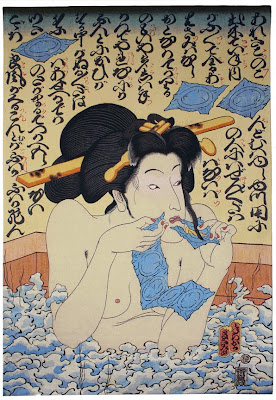 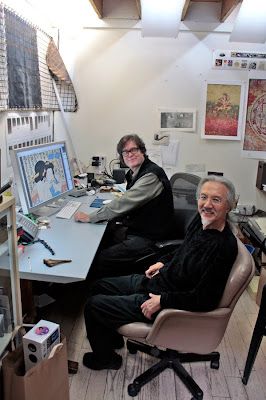 Don Farnsworth and Teraoka working on the weave file for Geisha at Magnolia Editions
The image itself has even more history: Geisha in Ofuro (ofuro is the Japanese word for "bath") began as a watercolor on canvas from the artist’s 1988 AIDS Series, described by Sarah Atlee as “an evocative mix of beauty and terror, sensual forms startled into abrupt mortality,” in which Teraoka grappled with the burgeoning AIDS crisis. 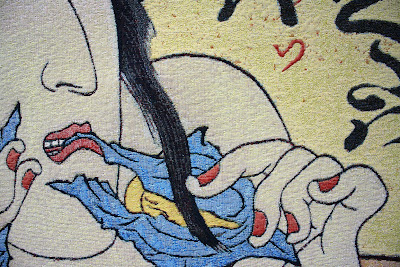 Detail from Teraoka's Geisha in Ofuro tapestry; click to enlarge & see the weave structures!
In 2008, Teraoka reworked the image as a woodblock print edition; now his Geisha takes on an especially monumental, heroic cast as a nearly ten-foot-tall tapestry. 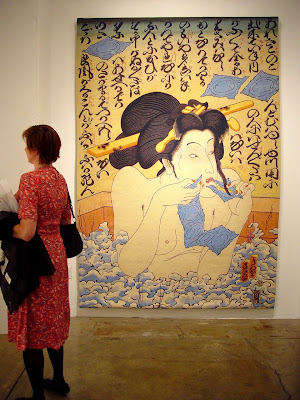 A Geisha tapestry proof at Catharine Clark Gallery; photo by Michael Strickland
Teraoka’s reflection on the effect of AIDS on the vast sex industry in Japan (the mizu-shobai, or “water business”) suggests that even in a world of fantasy, awareness is paramount, and a simple act of self-protection can be a measure of strength. 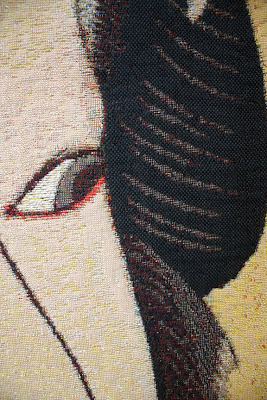 Detail from Teraoka's Geisha in Ofuro tapestry; click to enlarge
“A saint or angel doesn’t have to be a priest, a high-achieving person, or anyone particularly special,” Teraoka told Alison Bing in 2006, “anyone who is decent and civilized and a good person, we should be celebrating.”

A consummate painter, Teraoka mixed paint colors by hand to indicate color corrections on his tapestry proofs (just as Alex Katz did for his 2008 Ada with Sunglasses tapestry edition). 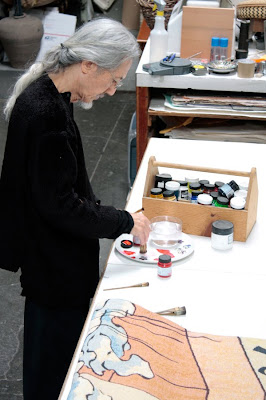 Posted by Magnolia Editions at 11:30 AM

It is nice painting to use color and brush with more effort. Ofuro painting give a message a relax from the Bath. Thanks for sharing with me.