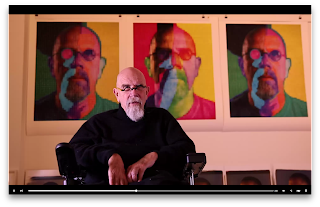 Chuck Close interviewed by Vanity Fair in his New York studio in early 2014; behind the artist are a suite of prints created at Magnolia Editions as maquettes from which Close is painting a new series of self-portraits.
In Vanity Fair's "Up Close and Personal," we go behind the scenes of a Chuck Close portrait sitting. Says the magazine: "Guest artist Chuck Close brought 20 Hollywood luminaries into his studio for a photo shoot with unusual and strict rules. He talks to us about how he gets everyone comfortable, even without a hair and makeup team, on the other side of his lens."

Keep an eye out for the appearance of three colorful self-portraits hung behind Close in one interview segment: they are 'proofs of concept,' maquettes based on Close's handmade collages and printed at large scale by Magnolia Editions as a reference for the artist to paint from. 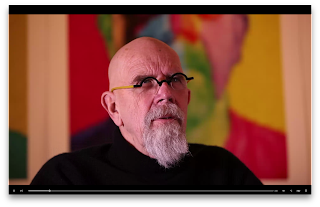 Chuck Close interviewed by Vanity Fair in his New York studio in early 2014.
These prints may or may not ultimately result in a published edition -- but as it stands, they are a unique example of the cross-fertilization between printmaking and painting in Close's practice, and of Magnolia's continued dedication to providing artists with cutting-edge tools and techniques with which to realize their concepts. 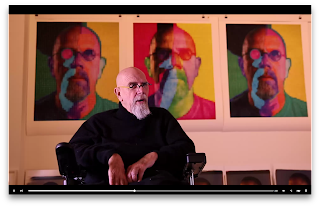 Chuck Close interviewed by Vanity Fair in his New York studio in early 2014 with a suite of prints created at Magnolia Editions as maquettes, which Close is using as reference materials for new paintings.
Meanwhile, in this video from the Australian Broadcasting Corporation previewing a major Close exhibition at the Museum of Contemporary Art in Sydney, Close and curator Terri Sultan discuss the artist's process and history with a panoply of Magnolia Editions publications and proofs in the background: