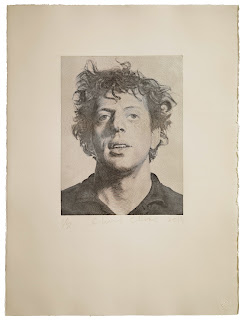 Chuck Close - Phil (Spiral), 2014. Etching on Arches Cover Cream. 15.37 x 11.87 in. (paper 30 x 22 in.) Edition of 50
Magnolia Editions’ latest edition from Chuck Close is a tour de force of contemporary printmaking, but its origins lie in a masterpiece of engraving created almost three hundred years ago. Phil (Spiral), a portrait of Close’s friend and longtime subject, the modern composer Philip Glass, was inspired by the 17th-century French painter and engraver Claude Mellan’s print The Sudarium or Veil of St Veronica, which owes its fame to Mellan’s remarkable use of a single line to engrave a realistic human face. 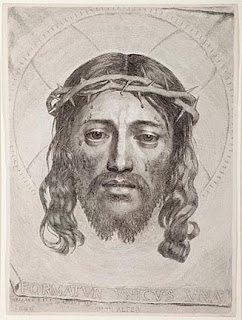 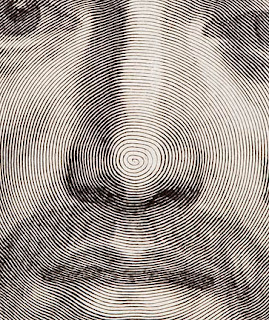 Detail of Mellan's Sudarium. Photo by John R. Glembin.
As an artist who has created groundbreaking etchings for more than thirty years, Chuck Close was naturally touched by the singular achievement of Mellan’s Sudarium, even acquiring his own copy of the famous print. During a recent visit to Close’s New York studio, the artist proposed a challenge to Donald Farnsworth: could the contemporary printmaking wizardry of Magnolia Editions convincingly recreate the famed and reputedly “inimitable” technique of one of the great French engravers? 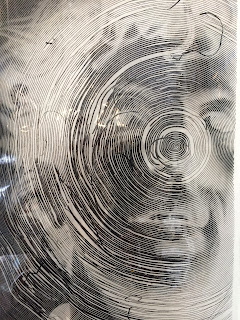 Naturally, the route to a successful Phil (Spiral) etching was an indirect one, with many twists and turns: at first, Close and Farnsworth used a combination of digital engraving tools and algorithms to generate a series of largely unsatisfactory tests and to roughly identify areas of light and dark where the line would need to change shape. Ultimately, the single line making up the print had to be manipulated and adjusted entirely by hand over a period of several months. 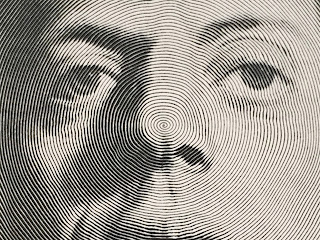 Detail from Phil (Spiral), 2014
“The existing algorithms and programs can turn your image into a series of concentric circles,” explains Farnsworth, “but they give you none of the depth that makes Mellan’s print so impressive. To achieve that kind of dimensionality, the line has to traverse the topography of the face at angles that demand a radical departure from the spiral. Even the smallest single hair on Phil’s head required a corresponding, minute undulation in the line.” 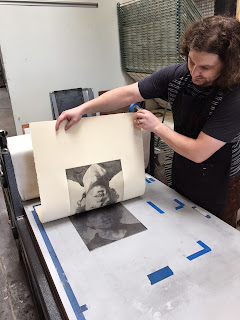 Nicholas Price pulls a proof of Phil (Spiral) on the etching press at Magnolia Editions. 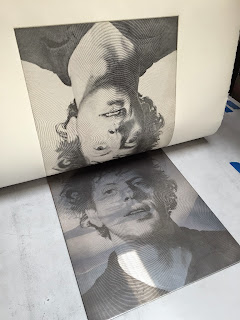 Printed at Magnolia Editions by master printer Nicholas Price in an edition of 50 and signed and numbered by the artist, Phil (Spiral) reflects an ongoing dialogue between printmaking’s past and future, into which Chuck Close and Magnolia Editions continue to introduce unexpected and exciting possibilities.

For more information and detail views of both Close and Mellan's prints, please see this press release: 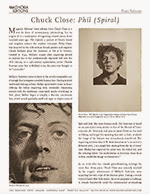