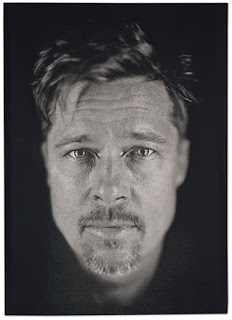 Chuck Close - Brad, 2009
Jacquard tapestry, 104 x 78 in. Edition of 10
Don't miss "Larger than Life: Exploring Scale in Contemporary Art," on view from June 2 through August 18 at Walnut Creek's Bedford Gallery at the Lesher Center for the Arts.

Curated by Carrie Lederer, the show features artists whose work investigates "the oversized, overstuffed, and uncanny elements in art" and includes a 2009 tapestry portrait of actor and philanthropist Brad Pitt by Chuck Close, published by Magnolia Editions.

This tapestry is unique for several reasons -- among them, the unflinchingly intimate version of Pitt's visage that Close's tiny-daguerreotype-to-mammoth-tapestry translation process produced. Close's original portrait of Pitt was shot for W Magazine:


As if to publicize a private epiphany about arriving at the brink of middle age, Pitt requested that artist Chuck Close, known for his superdetailed daguerreotype portraits that reveal every skin flaw, shoot the pictures accompanying this story. [...] Close suggests that the actor, who showed “no vanity” during the sitting, is once again playing with public perception.

“You can’t be the fair-haired young boy forever,” says Close. “At some point he’ll have to become some sort of character actor. Maybe a photograph of him with his crow’s-feet and furrowed brow is good for him. It humanizes him. It makes him less of a cinema god and more of a person.”