David Kimball in the Magnolia Editions paper mill
Magnolia Editions co-founder David C. Kimball retires this year, after more than thirty years of sharing his expertise in the field of handmade paper with artists and artisans in the Bay Area community and beyond.

A graduate of UCLA's Classics department with a Master's degree in Comparative Literature from San Francisco State, David entered the Ph. D. program in Comp Lit at the University of Oregon in the 1970s but was lured away by a young Bay Area papermaking enthusiast named Donald Farnsworth. Much like the 'patron saint of papermaking,' Dard Hunter, David's interest in paper grew out of his interest in books; initially, he recalls, he thought his experiments with paper might lead him to the field of letterpress printing or the production of literary broadsides.

Instead, he ended up co-founding Magnolia Editions in 1981 with Farnsworth and Arne Hiersoux, subsequently overseeing the studio's handmade paper mill as it relocated from its initial location in Kensington to the West Oakland warehouse location it occupies today. In the process, David became a behind-the-scenes collaborator on countless works of modern art. Many of Magnolia's early print editions either incorporated or were printed on handmade paper, such as Squeak Carnwath's Hand in Light lithograph series, which found Carnwath creating a unique effect by 'drawing' with raw paper pulp. Over the years, David created paper for editions by artists including Robert Arneson, Peter Voulkos, Joseph Goldyne, and Alan Magee; working with Farnsworth, he once used an eight-foot-long paper mold to create an enormous scroll of handmade paper for an ambitious print project by Judy Chicago.


David Kimball gives a papermaking demonstration (video)
Magnolia has gained a reputation as a valuable source of papermaking supplies and knowledge, due in no small part to David's authority in the field. Recognized as a master papermaker, David has held demonstrations and classes for students and tour groups from all over the world at Magnolia's paper mill. Harlan Crowder's flickr features this photo set of a Magnolia Editions tour that includes several step-by-step shots of David demonstrating the papermaking process.

He has also hosted innovative programs such as the Combat Paper Project, which found Gulf War veterans recycling scraps of their combat uniforms into handmade paper. Meanwhile, he has been a valuable member of the handmade paper community at large, actively working to support the nonprofit magazine Hand Papermaking and at one point serving as its chairman of the board. 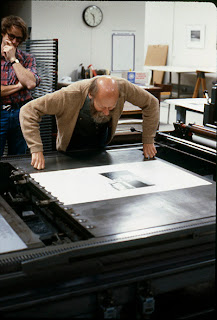 David Kimball and Robert Bechtle at Magnolia in 1982
David says the most rewarding part of his years at Magnolia has been the opportunity to create the substrate for a print or art piece -- to be a part of a team, serving a collaborator in the creation of a work of art. "It feels good," he says, "to know that I contributed even in a small way to, for example, Robert Bechtle's lithographs," popular editions on handmade paper which have long since sold out. He remains active in the handmade paper community and points to papermaker Timothy Barrett's recent MacArthur Fellowship as evidence of the medium's continued vitality.


Kimball making paper at Magnolia in 2011
The staff at Magnolia Editions is proud and fortunate to have benefited from David Kimball's expertise, and we wish him the very best in his future endeavors.

Posted by Magnolia Editions at 3:10 PM