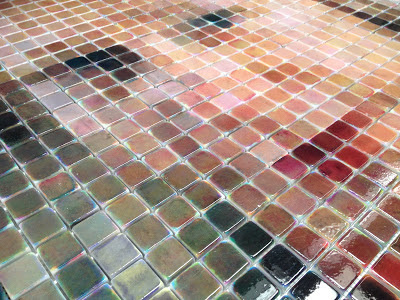 Test print of Chuck Close's Cindy (2012) on marble. Photo by Donald Farnsworth
Nearly every day at Magnolia Editions brings a new creative question or discovery: among the completed editions and framed work from the past, visitors to the studio can always find artifacts and examples of techniques that are still being refined -- or in some cases, were invented only a few hours ago! This post will highlight some of the works-in-progress currently underway at Magnolia, ranging from early experimental tests to forthcoming editions that just need the last few finishing touches.

While these projects span a variety of media and involve the unique imagery of very different artists, they have one thing in common: an exploration of issues of surface and texture, informed as much by the traditions of sculpture, ceramics, textiles, and collage as by the more traditional printmaking paradigm in which very flat layers of ink and pigments are layered on a flat paper ground. In Magnolia's latest experiments, lessons learned from decades of printmaking inform a variety of innovative approaches to surface: in each these projects, the possibilities of texture and surface are just as much a part of what makes the work interesting as the colors and forms depicted. 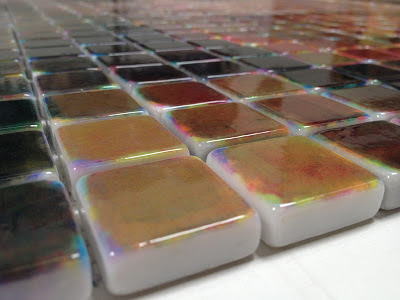 Close-up view of print on marble
This emphasis on surface is significant at Magnolia, where digital techniques and acrylic inkjet printing play such a large role in the studio's production of art. It signals that although a work might originate as a digital file -- whether digitized from a hand painted image or created entirely by manipulating pixels on a screen -- the ultimate production of that work must not only consider but prioritize its surface and texture. Put another way, the art is not just the bits and bytes seen on a computer screen, but the physical object created from that file; instead of trying to replicate the flatness and ethereal aspect of encountering an image on an LCD display, many artists at Magnolia are finding ways to bring those same images to life by using three-dimensional surfaces that reflect the rich variety of sensual, tactile, and unpredictable textures found in the world all around us. 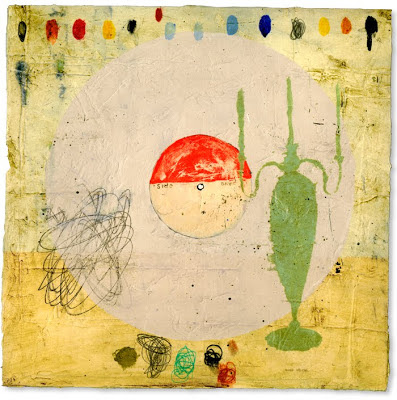 New work on panel by Squeak Carnwath
For Squeak Carnwath, the self-declared "painting chauvinist" for whom oil painting remains "queen of the arts," Magnolia has worked to develop a technique that allows Carnwath to create editioned multiples which fall under the rubric of printmaking while still retaining the layered physicality and impasto of a painting on canvas. Carnwath and Magnolia director Donald Farnsworth first explored this particular technique in 2009, the year of Carnwath's retrospective at the Oakland Museum; the artist used this method to create three unusual mixed-media editions on panel for that show, and continued to experiment with it in her artist's book, Philosophy, published by Magnolia in 2010. In a letter to poet John Yau, Farnsworth wrote of the book, "We are moving into strange and dangerous territory – printmaking that may raise some eyebrows... making textures that were, before this, the private playground of painting and sculpture." The technique involves building up layers of hand-brushed marble dust and gesso on a birch panel (or, in Philosophy, on Arches cotton rag paper). Carnwath distributes these layers according to the lines and objects depicted in each of her compositions, which are then printed onto the textured surface using acrylic ink; the prints are carefully registered on a flatbed printer so as to precisely align with the minute topographical variations of the modeling paste. 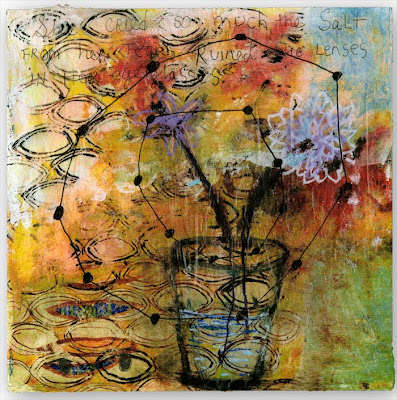 New work on panel by Squeak Carnwath
In Carnwath's latest works in progress, she delights in using this technique to conflate textures that are printed, painted, sculpted and limned; Carnwath says that this method resonates with the work of American trompe-l'oeil artists John Frederick Peto and William Harnett, and with the paintings of her favorite artist, Rembrandt, in which objects are three-dimensionally sculpted from layers of thickly applied paint. "There's illusion [in their work]," she says, "but there's also a kind of literalness," adding: "I like these kinds of experiments or loose objects that aren't painting – that are an extension of it."

From Carnwath's mixed media prints, which are nearing completion, we turn to a project still in its infancy: recently, Farnsworth and the Magnolia staff have begun experimenting with using a combination of UV-cured acrylic printing and the OSHA-approved clear coat process used in the automotive industry to generate stunning and hopefully long-lasting imagery on marble. Using a digital file from Chuck Close's recent series of watercolor prints, Magnolia has conducted a series of promising tests in which each individual square in Close's signature grid is printed in acrylic on a small tile of Carrara marble and then sent to a nearby auto shop for clear coating for maximum durability and a brilliantly glossy finish. Relative to the understated, matte watercolor prints on paper, these tests possess an extraordinary vibrancy and physicality. Close-up view of print on marble
Because the watercolor images are generated by layering hand-painted marks from four independent channels of color information, the edges of each layered mark don't line up exactly, creating a rather beautiful halo effect that hangs slightly over the edge of each tile: each unit thus becomes its own tiny abstract painting, in which the effect of gravity on the pigments as they are printed -- what Farnsworth likes to call "the hand of Nature" -- becomes part of the work. Marble is particularly appropriate for Close, who has noted in interviews the kinship between his process and the ancient marble floor mosaics he saw while living in Rome, and who is currently working with Magnolia to develop a series of twelve large mosaics for the East 86th St. subway station in Manhattan. Having frozen and boiled the printed marble tiles with no apparent change in color or consistency, Farnsworth and the staff at Magnolia are optimistic about this technique's eventual viability for durable, long-lasting public art projects. 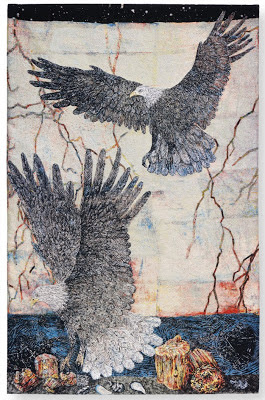 Proof of Guide, a new tapestry edition by Kiki Smith
Speaking of durable, long-lasting media, Magnolia continues to break ground in the field of tapestry weaving. The latest tapestry editions from Kiki Smith (now in the final proofing stages) are particularly notable for their translation of various kinds of collaged material, from crumpled handmade paper to glitter and metallics, and handmade marks suggesting a variety of natural textures -- fur, feathers, bark, skin, even the scales of a snake -- into warp and weft threads. 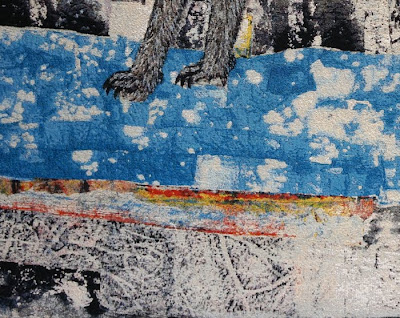 Detail from a proof of another new tapestry by Kiki Smith
One of the most striking aspects of these editions is their attention to surface, and the tension between the heterogenous array of textures depicted and the fact that they are all represented by a common textile medium with its own intrinsic tactility and texture. To the viewer of these tapestries, somehow the feathers feel like feathers and the fur 'reads' as fur -- even though if one were actually allowed to reach out and touch the work, they would of course simply feel like woven wool. Here again, the surface of the work emerges as an indispensible part of what makes it so compelling, as the central theme of the work -- a celebration of the diversity of flora and fauna -- is directly linked to the diverse textures of its surface. 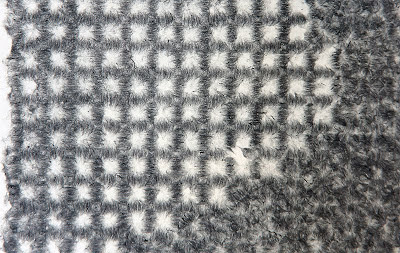 Detail from test of hikkake papermaking technique from Magnolia Editions' paper mill
Finally, we look at a technique so new that it is still somewhat secret; as such, we can currently offer only a brief preview of the tests to date. Magnolia has been taking advantage of its in-house paper mill to experiment with hikkake as a fine art technique. Hikkake is a technique practiced by very few papermakers (cursory research indicates less than a handful of practitioners, all in Japan) in which a layer of wet, freshly made paper is layered onto another piece of different-colored, freshly made paper to produce a pattern or image. As noted, we are limited in how much we can disclose as to the direction of the experiments at this time, but for now we can show you these handsome details from recent tests. Here, too, the surface becomes key to our experience of the work: the interaction of the two layers of paper pulp generates unique, dimensional textures which are as much a part of the work's appeal as the imagery depicted. 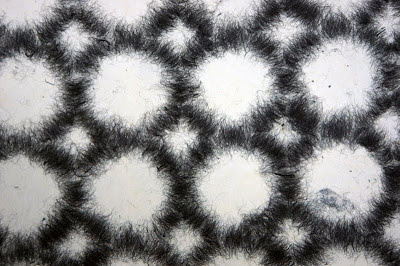 Detail from another hikkake test
In an essay on Carnwath's work, Karen Tsujimoto compares her methods to those of Rembrandt, noting that "in [Rembrandt's] hands, paint – the substance itself – became something real, and in the process, he was able to convey the idea that vision is a kind of touch." Magnolia's new projects similarly bridge the optic and the haptic, bringing an exciting dimensionality to the printmaking tradition and, as always, breaking down barriers between media in an effort to provide artists access to undiscovered modes of expression.
Posted by Magnolia Editions at 1:49 PM

Please note that you have written a very good blog.I came to know a lots of stuffs after reading your blog.Please keep sharing such good information so that we can keep sharing knowledges.