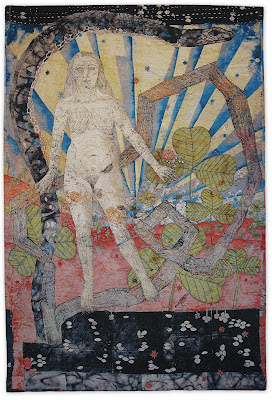 Kiki Smith - Earth, 2012. Jacquard tapestry, 113 x 75 in. Edition of 10
As an artist uniquely attuned to surface, and one whose practice revels in the possibilities of printmaking and multiples, it seems only natural that Kiki Smith has been working with Magnolia Editions since 2011 on a suite of three tapestry editions. The three tapestries – titled Sky, Earth, and Underground – were first exhibited in early 2012 at the Neuberger Museum of Art in Purchase, New York, as part of Smith’s exhibition, “Visionary Sugar.” Magnolia Editions’ tapestry technique is an ideal vehicle for Smith’s visions, yielding objects halfway between printmaking and sculpture, rooted in the Medieval yet informed by digital sophistication, and possessing a complex yet beguilingly tactile surface. 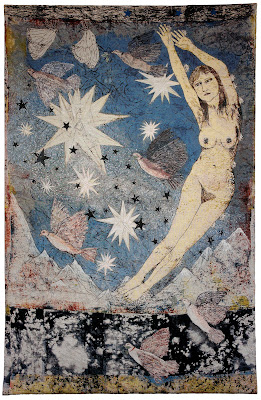 Kiki Smith - Sky, 2012. Jacquard tapestry, 113 x 75 in. Edition of 10
While her line and drawing style are unmistakable, Smith’s works in various sculptural and print media often employ sophisticated technologies in tandem with handwork. As Wendy Weitman writes in Kiki Smith: Prints, books & things, “Smith thrives on collaboration... Sculpture and printmaking share this collaborative attribute, each often requiring specialized artisans to achieve the finished object. Not surprisingly, Smith excels at both.” The artist is no stranger to textiles: she has been printing and painting on fabric since the early 1980s, including small editions of printed scarves. However, these tapestries employ no printing; their imagery is made up entirely of warp and weft threads. Each composition has undergone dozens of steps and versions on its way to completion, from large collaged paper drawings to digital files; prints to reprints to reprints with overpainting and more collaging; painting, weaving, and reweaving until each detail, texture, and color met exactly with the artist’s specifications. 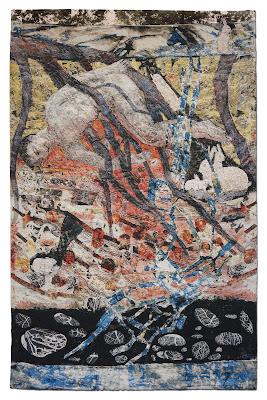 Kiki Smith - Underground, 2012. Jacquard tapestry, 113 x 75 in. Edition of 10
From crisp pencil lines to watercolor washes and the wrinkles of Nepalese paper, Smith’s tapestry editions weave together a multitude of surface textures, at times conflating skin and bark, feathers and fur, air and water to depict a richly heterogeneous world teeming with life. The scale of the double-headed Jacquard loom allows for the depiction of life-sized human figures, surely appealing to an artist whose work has so often reenvisioned the human form. Earth’s female nude is covered with marks resembling the bark of a birch tree, perhaps recalling Daphne of Greek mythology, who famously metamorphized into a tree to thwart the amorous advances of Apollo. Placed atop a winding, serpentine branch, one hand resting on a snake and the other on a leaf endowed with eyes, Earth’s figure suggests a theme common to all three tapestries: an absence of boundaries between human, flora, and fauna native to the realm of myth and animistic spiritual traditions. Smith says the cast of plants, animals, and heavenly bodies in this body of work suggest “how imperative it is at this moment to celebrate and honor the wondrous and precarious nature of being here on earth.”