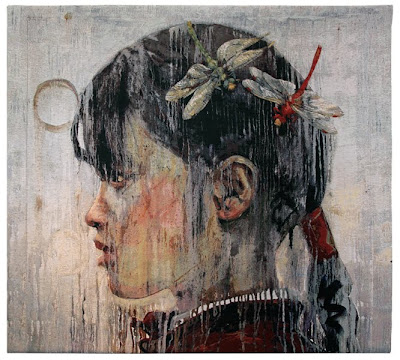 In her paintings, Liu primarily uses 19th and 20th century photographs of Chinese laborers and courtesans, which she surrounds with a unique mixture of traditional Chinese symbols, calligraphic flourishes, and dripping veils of linseed oil. Liu’s husband, the writer and curator Jeff Kelley, describes her paintings as an alchemical marriage, in which “the fresh, luscious poetry of the “mineral period” (painting) presses against the dry atrophied plates of the “chemical period” (photography). 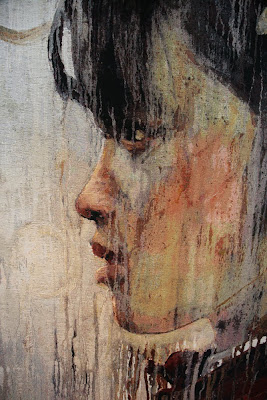 Liu’s tapestries, then, are the grandchildren of this marriage. Pixels containing the DNA of those paintings are ‘bred’ with the tapestry medium to produce a new hybrid, in which the singular texture and familiar physical presence of the “textile period” are infused with the precise values of the “digital period.” The photographs, whose authoritative gaze is literally disintegrated by the artist's strokes of oil, are practically lost; the ensuing compositions exist in a space somewhere between painting and textiles, pigment and threads. Her tapestries disavow an inherent truth in any one form of mark-making, weaving together diverse media to tell their dreamlike tales. 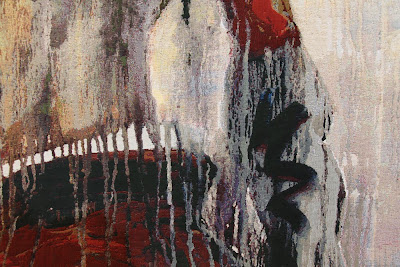 In keeping with its title, Liu's Rainmaker is resplendent with splashy, dripping trails of painted color; two dragonflies, Chinese symbols of summer, crown the head of its enigmatic, anonymous subject.

Amazing topic! Our platform https://essaysrescue.com/masterpapers-review/ supply not only good authors, but also the best. An expert will have an appropriate postgraduate degree in the required subject area. Guarantee – you have time to review your work as early as possible so you can make any necessary changes.