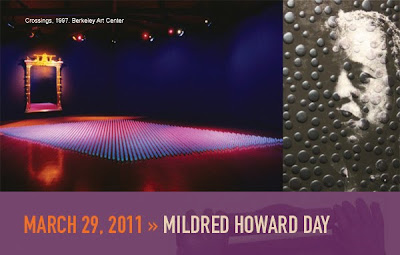 The city of Berkeley has announced it will declare Tuesday, March 29, 2011 to be Mildred Howard Day!

As Leah Garchik of the San Francisco Chronicle notes:

Howard, a San Francisco-born artist whose work is at the Oakland Museum of California, the de Young, SFMOMA, the San Jose Museum of Art and elsewhere, has founded educational programs, managed an art and communities program at the Exploratorium, and was executive director of the Edible Schoolyard. She's been involved with nearly every university and art institution in the Bay Area and has also worked in Alameda County Juvenile Hall and in various Bay Area jails.

Howard has lived in Berkeley since 1949 and has lived a uniquely engaged life; as a teenager, she shook hands with John F. Kennedy and had lunch with Fannie Lou Hamer, and recalls seeing Muhammad Ali shadowboxing his way down Adeline one morning in the early 1970s. She was a member of SNCC and CORE, protested segregation in Berkeley schools, and continues to work with youth and emerging artists both in the Bay Area and internationally.

The event is free and open to the public; please come show your support for Mildred!