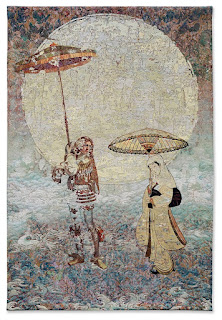 Donald & Era Farnsworth - In the Moonlight (I Forget I'm Human), 2017
cotton Jacquard tapestry with acrylic paint, 96 1/2 x 64 1/2 inches
Please join us at Port Angeles Fine Art Center in Port Angeles, WA for the opening of "I Forget I'm Human," an exhibition of tapestries and works on paper by Donald and Era Farnsworth on view from September 22 through November 18, 2018. An opening reception with the artists will be held Saturday, September 22 from 5-7 pm.

Additionally, the Farnsworths will give a public presentation in the Raymond Carver Room at the Port Angeles Library on Sunday, September 23, 3-5 pm; this event is free and open to the public. 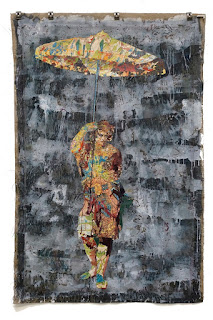 Donald & Era Farnsworth - Bulwark, 2017
mixed media on linen canvas, 70 x 46 inches
In "I Forget I’m Human," the Farnsworths address the relationship between humanity and the environment, investigating how myth and science have shaped human values from ancient times to the present day. Nearly all of the compositions in "I Forget I’m Human" include multiple layers of both hand-painted and digitally generated elements, creating a palimpsest-like effect that echoes the layers, patinas, and weathered wabi-sabi of works that have survived from ancient times while also incorporating contemporary digital processes.

The exhibition includes tapestries which use a medium older than oil on canvas – weaving, albeit updated by 19th-century Jacquard and 21st-century digital color matching technologies. Meanwhile, the Farnsworths' Art Notes series ‘recycles’ and re-imagines one dollar bill notes, re-envisioning the “Almighty Dollar” as a site wherein to celebrate heroes of creativity and conservation and to light-heartedly castigate polluters and oligarchs. A series of works depicting therianthropic (animal-human hybrid) deities harkens back to those appearing in the earliest surviving human artworks while also incorporating elements from Buddhist, Hindu, Judeo-Christian, Islamic and Jungian iconographies. 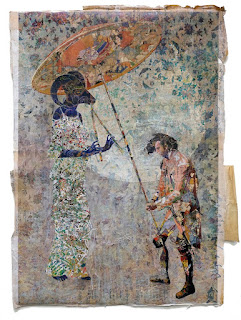 Posted by Magnolia Editions at 12:29 PM