Chuck Close tapestries at US Embassy in London 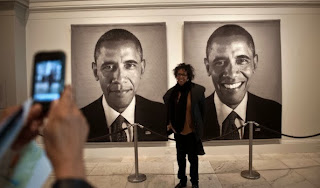 Tapestry portraits of President Barack Obama by Chuck Close at the US Embassy in London. Photo by Nicholas Kamm/AFP/Getty Images
Magnolia Editions has published several editions by Chuck Close depicting President Barack Obama; two of these, Close's 2012 tapestries Obama 2012 (I) and Obama 2012 (II), were recently installed at the US Embassy in London.

The portraits are nearly 8 feet tall and more than 6 feet wide, with the final piece looking like photos but feeling like textiles.

Close used one photo of Obama smiling and another in which he appears in a more serious, “presidential” demeanor. The artist is also an advocate for arts education in schools.

“I photographed him last week for an hour and a half,” Close told the Village Voice at the time. “And boy, did I take the opportunity to lobby him.”

Last year, a watercolor print made from the same portraits was available for purchase to benefit the Obama Victory Fund, with a few of the pieces signed by Close and Obama. The Mint Museum in North Carolina was unveiled in fall 2012 to celebrate the Democratic National Convention in Charlotte. Close also designed commemorative posters of the president that were sold during the 2013 presidential inauguration in Washington, D.C.

The tapestry was one of 10 such portraits available for $100,000 apiece as part of a fundraiser also supporting the Obama Victory Fund.

For more information on Close's portraits of the president, please see these previous posts.