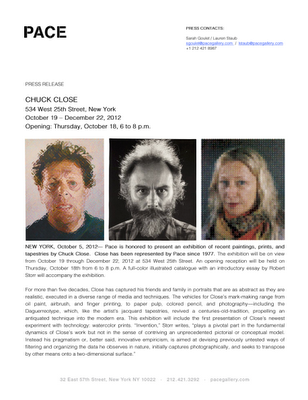 Press Release - PDF (831kb)
NEW YORK, October 5, 2012— Pace is honored to present an exhibition of recent paintings, prints, and tapestries by Chuck Close. Close has been represented by Pace since 1977. The exhibition will be on view from October 19 through December 22, 2012 at 534 West 25th Street. An opening reception will be held on Thursday, October 18th from 6 to 8 p.m. A full-color illustrated catalogue with an introductory essay by Robert Storr will accompany the exhibition.

For more than five decades, Close has captured his friends and family in portraits that are as abstract as they are realistic, executed in a diverse range of media and techniques. The vehicles for Close’s mark-making range from oil paint, airbrush, and finger printing, to paper pulp, colored pencil, and photography—including the Daguerreotype, which, like the artist’s jacquard tapestries, revived a centuries-old-tradition, propelling an antiquated technique into the modern era. This exhibition will include the first presentation of Close’s newest experiment with technology: watercolor prints. “Invention,” Storr writes, “plays a pivotal part in the fundamental dynamics of Close’s work but not in the sense of contriving an unprecedented pictorial or conceptual model. Instead his pragmatism or, better said, innovative empiricism, is aimed at devising previously untested ways of filtering and organizing the data he observes in nature, initially captures photographically, and seeks to transpose by other means onto a two-dimensional surface.”

Highlights of the exhibition, Close’s first gallery show in New York since his 2009 exhibition at Pace, include never-before-seen paintings of Cindy [Sherman], 2012 and Phil [Glass], 2011-2012. Phil, which stretches over 9 feet tall and 7 feet wide, is the artist’s most recent iteration of his close friend, who he has captured in numerous media since 1969, when the now famed composer was working as a studio assistant to Close’s classmate from Yale, Richard Serra. Cindy, the artist’s newest oil painting, is also the most recent portrait that Close has created of the artist since he first painted her in 1988. Two sets of Self-Portrait triptychs—one larger at 72 x 60 inches and another more intimate series at 36 x 30 inches, will be presented in their entirety for the first time.

This exhibition will also be the East Coast debut of the artist’s recent paintings of Kara [Walker], 2010, Laurie [Anderson], 2011, Aggie [Gund], 2011, and the musician Paul [Simon], 2011, as well as tapestries of Lou [Reed], 2012, Lucas [Samaras], 2011 and Roy [Lichtenstein], 2011. This exhibition will also feature Close’s new watercolor prints, the artist’s first in-depth experimentation with the possibilities of digital technology. Close uses approximately 14,500 of his own, hand-made watercolor marks, individually scanned into the computer, as the vocabulary for these works. Fully immersed in every aspect of the complex process, Close organizes each image, determining how to break the composition down, the number of squares over which it will fall, and the order and exact location that each individual mark will be applied. The artist prints the works in watercolor on watercolor paper in layers of magenta, cyan, and yellow, never repeating a mark more than six times in each print. Storr writes, Close’s criterion for judging a process is not whether it achieves a preordained goal efficiently, but rather whether it significantly alters and enriches the ways we see an image we thought we knew from exposure to it in other incarnations. Accordingly, Close’s decision to set computers to the task of making watercolors was, after some trial and error, dictated by the particular effects that became manifest while deploying them, and most especially the manner in which computers enhanced the medium-specific qualities of watercolor instead of their own data-digesting capacities.

Chuck Close (b. 1940, Monroe, Washington) has been the subject of over 200 solo exhibitions in more than 20 countries, including major exhibitions at New York’s Museum of Modern Art, The Metropolitan Museum of Art, the Museo Nacional Centro de Arte Reina Sofia in Madrid, and most recently, at the State Hermitage Museum in St. Petersburg, Russia. Close has also participated in nearly 800 group exhibitions. A survey devoted to the artist’s innovative printmaking techniques, entitled Chuck Close Prints: Process and Collaboration, will have travelled to eighteen venues, five countries and three continents by October of 2013, when it reaches the final venue of its ten year run at the Moderne Salzburg, MdM Mönchsbert in Austria as Chuck Close: Multiple Portraits (October 27 through February 17, 2013). Another exhibition devoted to the artist’s prints will be on view at Monterey Museum of Art, California from October 27, 2012 through February 17, 2013.

An award-winning artist, Mr. Close was presented with the prestigious National Medal of Arts by President Clinton in 2000. In 1988 Mr. Close was paralyzed following a rare spinal artery collapse. He continues to paint using a brush-holding device strapped to his wrist and forearm. Mr. Close studied at the University of Washington School of Art (B.A., 1962) and at the Yale University School of Art and Architecture (B.F.A., 1963; M.F.A., 1964), receiving honorary degrees from both of his alma maters as well as 20 other institutions. Close is a member of the American Academy of Arts and Letters, has served on the board of many arts organizations and was recently appointed by President Obama to serve on The President’s Committee on the Arts and the Humanities. The artist, who painted President Clinton in, 2006, also recently photographed President Obama.

For contact information, please consult the PDF linked above or visit Pace's website.
Posted by Magnolia Editions at 12:01 PM