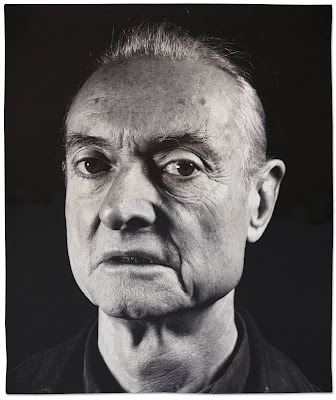 There is a subtle irony in Close's hyper-realistic, hyper-detailed, black and white tapestry portrait of famed American pop artist Roy Lichtenstein, whose own work memorably used lo-fi Ben-Day dots and bold colors to create images from a minimum of information.

Like Close’s Lucas, a portrait of Lucas Samaras published earlier this year, Roy is translated from a daguerreotype, one of the oldest and most richly detailed forms of early photography. The edition is also woven at a more intimate size than the artist's earlier tapestries, and the detail in its matte surface is due to a higher thread count and a new palette which includes wool fibers for several of the black values in the work.

The unprecedented detail and texture in Roy and Lucas have set a new standard, posing a timely challenge to an art world status quo that appears to have only recently (one might even say grudgingly) begun to accept contemporary textile work as a legitimate medium, just as it admitted so many other scruffy outsiders (lithography, ceramics, et al.) in previous decades. It was only three years ago that Yale professor Carol Armstrong seemed so befuddled by Close's tapestries that she was moved to wonder in the pages of Artforum: "What would possess any self-respecting contemporary artist to turn to such a medium, with its atavistic associations with the High Renaissance?"

Luckily, Armstrong provides part of the answer to her own question later in the article in what she labels "the boundary-crossing haptics of tapestry." Contrasting the haptic (perceiving by touch) with the optic (perceiving by the eye), she discovers "the paradoxical contradictions of making a furred, tactile object out of the uncanny visual precision of the old-fashioned daguerreotype."

What her article neglects to mention is the role of the the digital age as both catalyst and context for these works: in a world of disembodied cloud computing, where digital ones and zeroes are the currency of day-to-day life and many of us touch our phones more than we touch each other, Close's tapestries (woven on a computerised loom from digital weave files) are extraordinary for their canny, perpetual shift between the optic and the haptic, between eye and body, information and sensation.

Works like Roy and Lucas are physical manifestations of a staggering amount of digitized information, writ large in a medium with centuries of connection to the body (you're probably wearing something made of threads as you read this). These tapestries reference the pixelated character of the contemporary digital image, which Close anticipated in his analog grid works of the last four decades, without yielding one iota of presence in the three-dimensional world of bodies in space.

These works do not exist in the cloud; they exist in a room with you, demanding an intimate confrontation with both their medium -- sumptuously textured weave structures, begging to be touched -- and their subjects, whose personalities, amplified by the sheer scale of the tapestries and the amount of information in the images, emanate from their gazes and expressions like music from a speaker.

As Maria Flores writes in a 2007 review:

As always, Close’s thought-provoking work compels his viewers to pay "close" notice not only to his subjects, but also the processes through which he creates them.

His stark photographs of equally celebrated artists [...] are converted by means of a customized digital loom using 17,800 warp threads, and harken back to the days when fine tapestries hung proudly in castles and chateaus during the 19th century. You’d never guess, from far away at least, that these large-scale jacquard tapestry portraits are anything but photo-emulsions – they are so damn clear and beautiful. But in the intimate gallery space of Adamson, you begin to see the intricacies of the stitching, the delicate transfer of light to thread, the gorgeous, voluminous photos-turned-fabric. Black areas even have concentrated texture, something that is often lost in photography.

Roy, together with Lucas and Close's 2007 Self Portrait/Color, will be shown at Blum & Poe in Los Angeles later this month. Please see this post for more details.